A dramatic and romantic narrative ballet in 2-Acts and 4-Scenes (c. 60 mins) set on the Spanish volcanic island of Tenerife where the mysterious and powerful Fire God, Vulcanus and Sea Goddess, Leukothea reside. The story and composition by Kinsey is scored for orchestra with guitar and soprano.

The story in brief
One man caught in a love triangle pursues his personal desires by making a powerful pact with Vulcanus, the God of Fire and Volcanoes. Granted the power to dance like a dazzling virtuoso, it is his misuse of this power, which eventually leads to his downfall and that of the islanders.  Only the power of love and acceptance, as personified by the Sea Goddess Leukothea, can restore the island’s blessings once more.

Critical acclaim for the story and score:

“It is a beautiful score and a fantastic story.” Artistic Director of Cape Town City Ballet, Robin van Wyk

“Overall this is an impressive work that deserves live performance … the orchestration demonstrates a sound knowledge of the craft … the dramatic purpose is secure and compelling.”
Professor Philip Grange, University of Manchester, UK.

PLEASE NOTE ALL CONTENT (WRITTEN, PHOTOS, SCORES AND SOUND FILES) ON THIS OR ANY PAGES OF THIS WEBSITE IS THE SOLE PROPERTY OF AVRIL KINSEY and MAY NOT BE FORWARDED, COPIED, OR DOWNLOADED.

PLEASE ENJOY HERE AND DO WRITE TO US IF YOU HAVE ANY INTEREST IN THE MATERIAL IN ANY FORM OR MANNER – akinsey@mweb.co.za 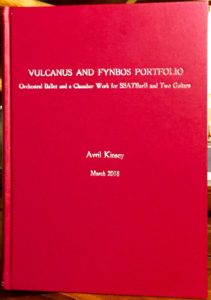