The Wild Coast is a roller-coaster mystery, adventure story currently in the financing phase of pre-production. Wild Coast Motion Picture Productions (Pty) Ltd will be producing this exciting South African, first of its kind musical adventure feature with a black heroine who seeks a legend to become one.

What if a 400-year-old code is composed into music, and this music holds the clues to finding a priceless treasure shipwrecked off the wildest coast of Africa?    Inspired by a true historical event.

To read the One Sheet Synopsis, or  Screenplay email:  The Co-Producer:  wildcoastpro@gmail.com

Committed to making it happen, Avril Kinsey envisions a major South African Producer and international Co-Producer is required to make this mystery, drama, adventure story aimed at the international market.

Logline: A woman’s quest, to uncover a musical code hidden in a 400-year-old manuscript, with clues to a priceless treasure savagely shipwrecked off the wildest coast of Africa, discovers she holds the key to unlocking an ancient mystery with the power to unite nations.

Brief Synopsis: A 400-year-old musical code, hidden in a diary contains clues to an ancient, treasured instrument, which is passed from a Sultan to his daughter and from a Knight to his, before being savagely shipwrecked off the Wild Coast of Africa.

The missing treasure will deeply impact four lives, but touch millions more: Dr. Samantha Baker, an ambitious music composer who loses her university post, is forced to step out of her four-wall comfort zone and must find the treasure in time for the UN Peace concert of the decade. Her hopes are shattered when she sees her guitar case floating out to sea with a dead baby in it.

Macho-loser, ex-diver Roberto, on self-imposed exile from a failing marriage must find any treasure he can, to inherit the money he desperately needs to save his dying daughter. A poor African couple, Wild Eyes and Beauty use Sam’s guitar case to appease their ancestral sea spirits. Soon their lives converge, until a greater mystery unfolds that changes their lives, with the power to impact nations. (Copyright WGSA F2018200226) & US Copyright Office. 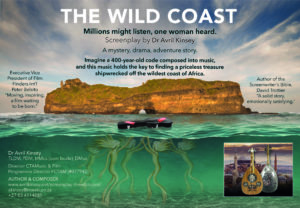 As a writer/producer/composer she has worked on several documentaries for SABC TV including Modjadji – The Rain Queen, Luthier – Mervyn Davis, South Africa’s First Guitar Orchestra and Legends of the Cape. The Wild Coast is her second feature film screenplay. She completed the libretto and orchestral score for a two act ballet Vulcanus, which earned her a doctoral degree in music composition. She is currently in development with The Wild Coast feature film.

Kinsey has written and published three music books, several articles, song lyrics, academic papers, and, as a performer and producer she has recorded seven compact discs. She has given guitar masterclasses at the Royal Academy of Music, the Volterra Project in Italy and at Mannes School of Music and at the prestigious Julliard Music School in New York. She was awarded an Astris Award for her outstanding achievement in music.

Further to her writing career, she undertook a prolific music performing career, concertising in the United Kingdom, United States of America, Singapore, Malaysia, Portugal, Spain, Italy, Holland, Belgium, Austria, Germany, Denmark, Scotland, Greece and South Africa. Her many classical guitar compositions and recordings are published by Art Music Publishing and Recording. She also worked on music demos for films such as Heart of Darkness and Ice Runner. She accompanied Luciano Pavarotti with the CPO during the Cape Town performance of his world tour.

Kinsey is the recipient of numerous grants, sponsorships and awards from organisations such as ACT, NAC, BASA, the SAMRO Foundation, SASRIM and others. She is founding director of the Cape Town Academy of Music and Film, and Wild Coast Motion Picture Productions (Pty) Ltd. She is a full WGSA (F2018200226) and PRS member.